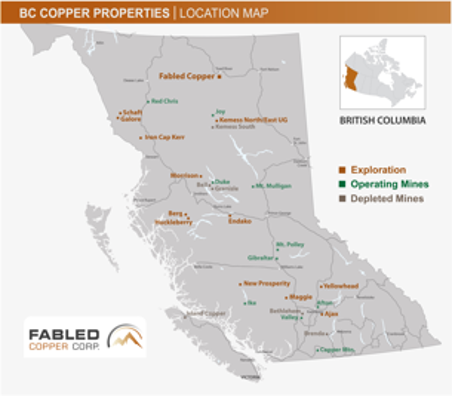 The Project is comprised of the Neil Property, the Toro Property and the Bronson property located in northern British Columbia. See Figure 2 below. 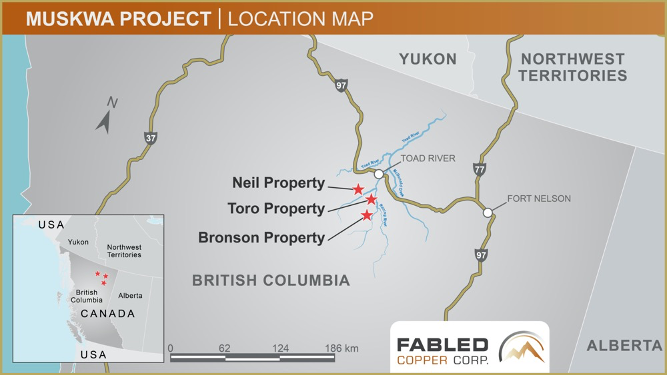 Peter Hawley, President, CEO reports; "A total of 19 specific areas were mapped and prospected during the 2021 field season and we started the New Year by reporting our findings on the Lady Luck occurrence in the south end of the Neil Property, followed by the Mac; the 8A, Harris, the 2a and 2b, the Creek, Keays south, Belcher Creek, the Magnum Mine UAV Done Mission, the Magnum, the Neil UAV Drone Mission, the Neil, EM-1, Ram Creek, Davis Keays Eagle UAV Drone Mission, sampling, surface geophysics, the underground inspection of the 6950 level of the Davis Keays Eagle Vein and now the structural interpretation of the Davis Keays area." See Figure 3 below. 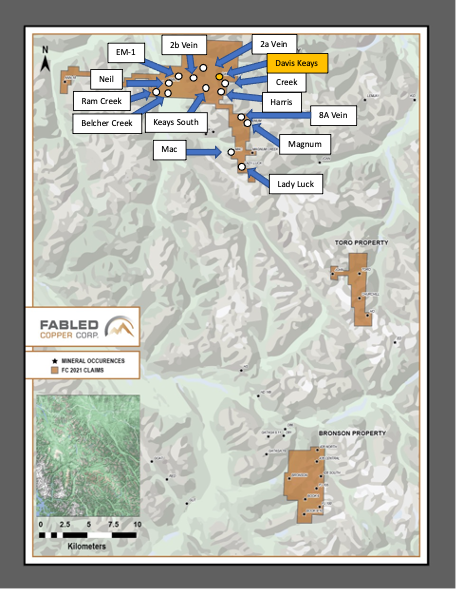 Minor follow-up exploration activity took place during the 1950s and early 1960s, with activity increasing significantly during the late 1960s and early 1970s. The work resulted in recognition of numerous copper occurrences within the Neil Property, the most significant of which are the Magnum Vein (Churchill Copper) and the Eagle Vein (Davis Keays). The Lady vein system at the Lady Luck Occurrence also received minor underground development work from 1969 - 1970. See Photo 1 below 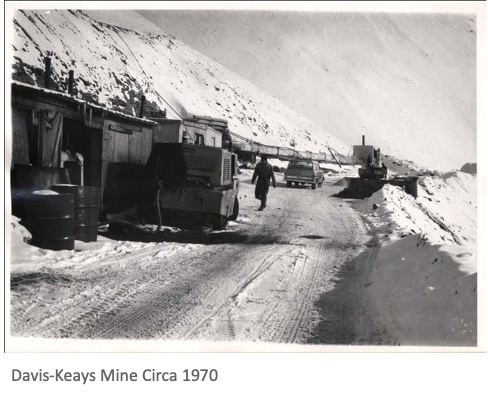 More details on the past history, 2021 UAV drone mission, sampling and surface geophysics have been made public in the April 27th, May 4th, May 11th and May 25th releases.

The purpose of the 2021 structural survey over the Davis Keays area was threefold;

ii) Review structural data collected at each of the two occurrences

All maps and imagery were drafted in the NAD83 (CSRS) datum and projected to UTM zone 10. A Google Earth TM .kmz file also performed which provided geotagged photographs taken at each mapping locality on the Eagle vein(s).

Coverage was restricted to the western slopes in the vicinity of the historic switchback road constructed over the vein during historic development and mining. Seventy‐one structural measurements of bedding, cleavage, fold axes and veins were taken and 49 station geotagged photographs documented key features at each locality reviewed. All mapping data were plotted on high resolution orthomosaic imagery available for the site. See Figure 4 below. 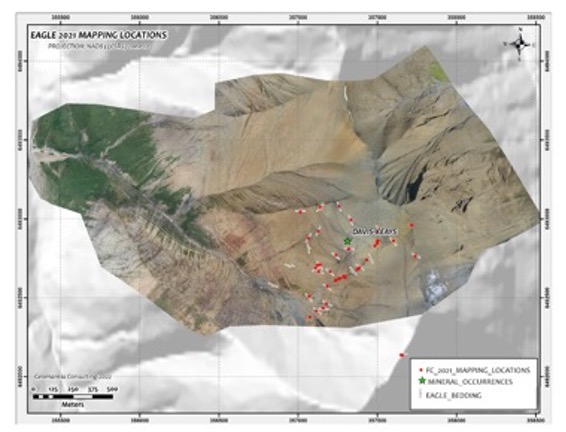 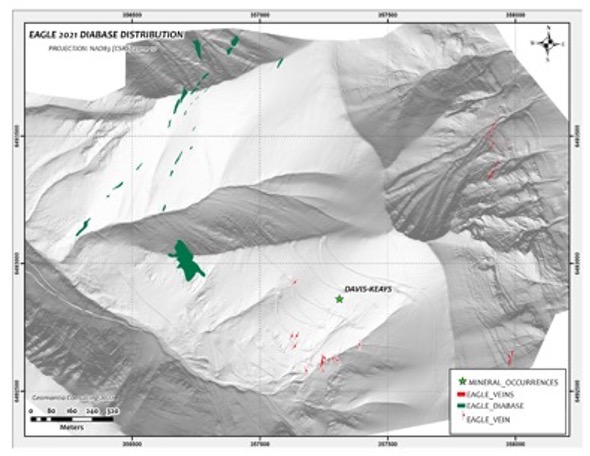 The orthomosaic was also reviewed in 3-D to better understand the location of veining and folding present in the Davis‐Keays target.

Lineament interpretations were carried out to better understand the location of faults within known copper mineralized zones. Stratigraphic contacts were not mapped with enough confidence to be generate a lithological map for the area, however two main stratigraphic units were observed. 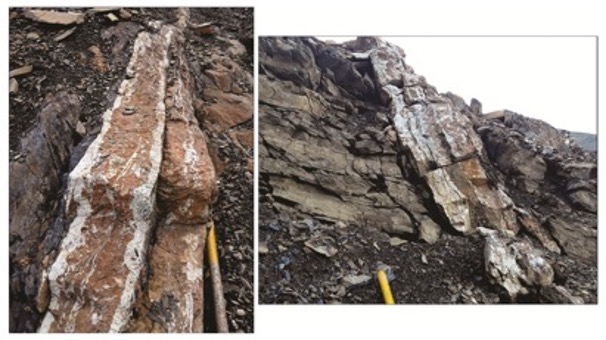 In addition to mineralized veining two other types of mineralization were observed; 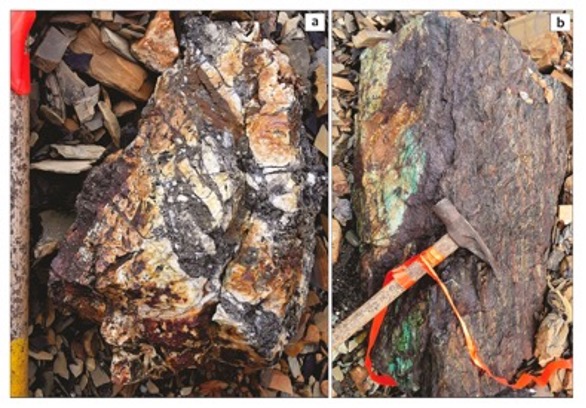 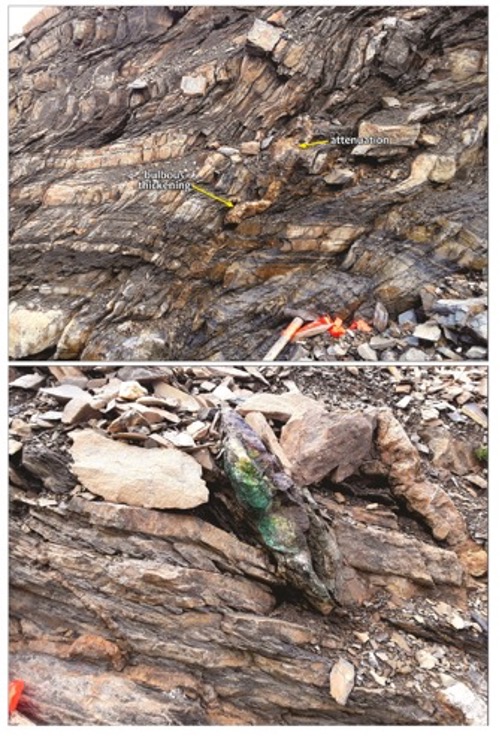 The results of the structural studies clearly defined three preferred structural corridors, one of which corresponds to the underground Davis Keays, Eagle Vein workings. At this time not enough work or observations have to made to determine if there is an association with the mineralized veining and diabase dikes. See Figure 6 below. 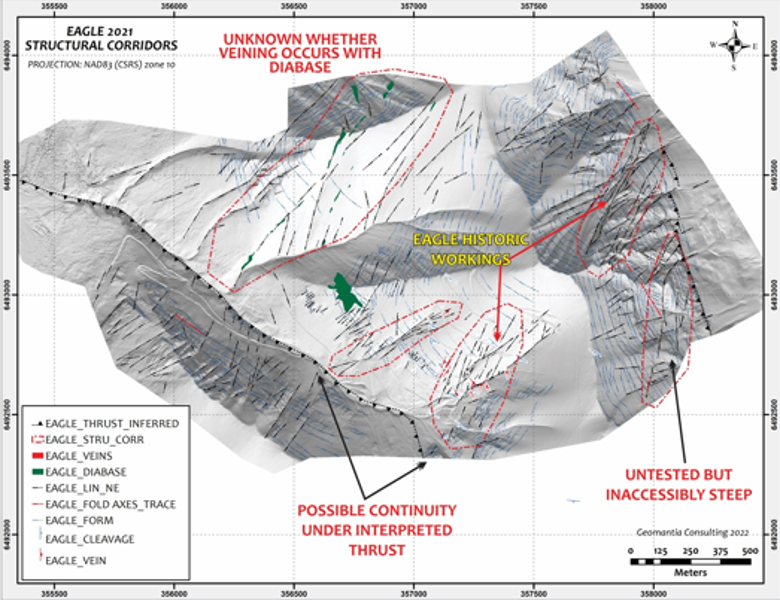 Detailed observation of the high resolution Hillshade photo of the Davis Keays area clearly defines structural liniments which correspond to some of the mineralized features observed in the field. See Figure 7a for hillshade liniments and Figure 7b for liniments outlined in red. 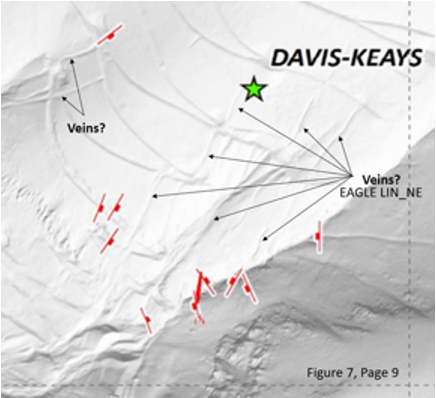 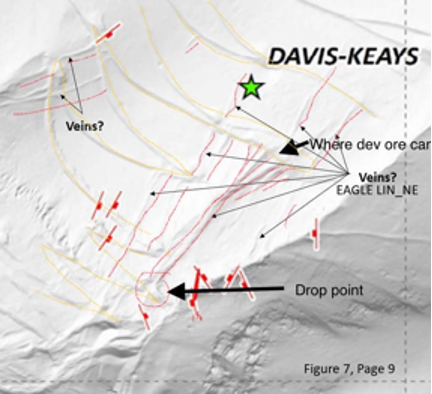 This led to close observation of the other side of the mountain where the eagle vein was observed and the same liniments associated with quartz veining was clearly evident as shown by the yellow dashed traces. See Photos 6, 7 below. 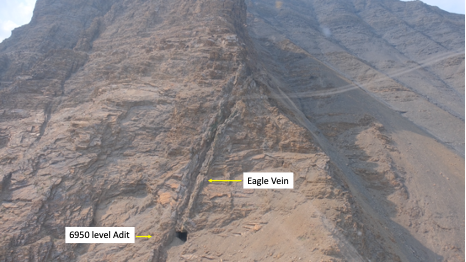 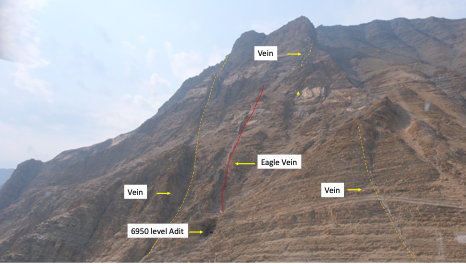 Due to this correlation from both sides of the mountain, further detailed observations were made of the northeast area, See Figure 8 and box outline of detailed study area 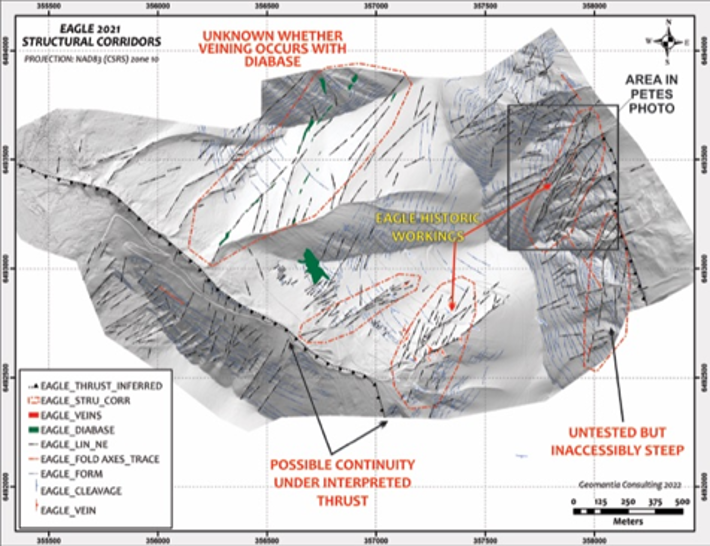 This magnified observation of the northeast side of the mountain clearly show and defines the locations and strikes of at least 5 vein sets in addition to that of the eagle vein and all having a similar attitude. See Photo 8a for detailed photo of vein sets and Photo 8b of vein sets outlined in red trace. 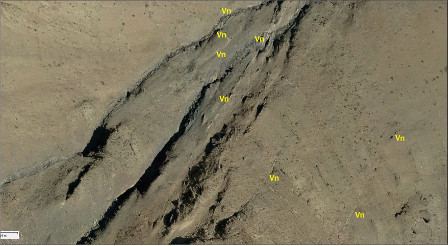 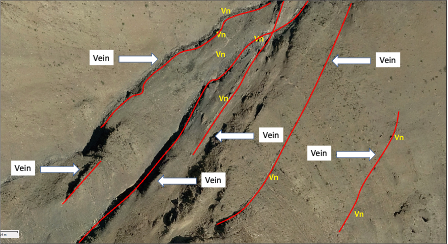 Looking at the structural kinetics we see both the macro scale slippage between vein sets, see Photo 9A below and the same movement in micro scale in the vein and replacement mineralization, see Photo 9b below. 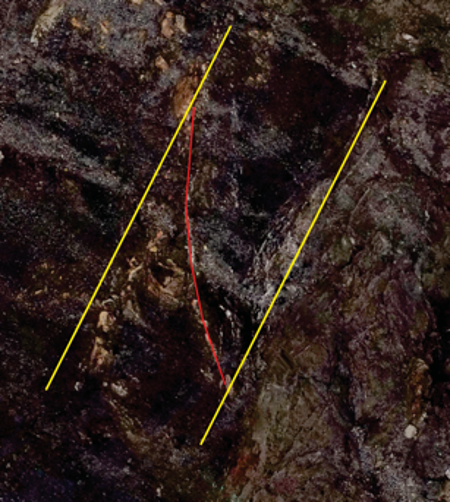 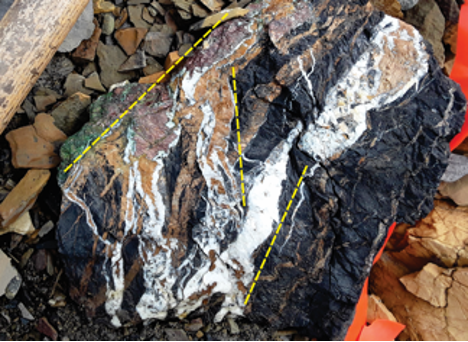 All the various types of surveys performed on the Davis Keays area come to one general conclusion. The Davis Keays area is composed of numerous mineralized vein sets within a clearly defined structural corridor of which the eagle vein is only one that has seen extensive concentration of work both on surface and underground.

The 2022 field exploration program will follow up on this important findings but in addition to this, the Davis Keays area is Fabled Copper's first priority drill target to test the multi vein sets encounter during 2021 exploration program.

For samples triggering precious metal over-limit thresholds of 10 g/t Au or 100 g/t Ag, the following is being used:

Fabled Copper is a junior mining exploration company. Its current focus is to creating value for stakeholders through the exploration and development of its existing copper properties located in northern British Columbia. The Muskwa Project comprises a total of 76 claims in two non-contiguous blocks and totals approximately 8,064.9 hectares, located in the Liard Mining Division in northern British Columbia.

The technical information contained in this news release has been approved by Peter J. Hawley, P.Geo. President and C.E.O. of Fabled, who is a Qualified Person as defined in National Instrument 43-101 - Standards of Disclosure for Mineral Projects.

The Canadian Securities Exchange does not accept responsibility for the adequacy or accuracy of this release.

Certain statements contained in this news release constitute "forward-looking information" as such term is used in applicable Canadian securities laws. Forward-looking information is based on plans, expectations and estimates of management at the date the information is provided and is subject to certain factors and assumptions, including, that the Company's financial condition and development plans do not change as a result of unforeseen events and that the Company obtains any required regulatory approvals.

Forward-looking information is subject to a variety of risks and uncertainties and other factors that could cause plans, estimates and actual results to vary materially from those projected in such forward-looking information. Some of the risks and other factors that could cause results to differ materially from those expressed in the forward-looking statements include, but are not limited to: impacts from the coronavirus or other epidemics, general economic conditions in Canada, the United States and globally; industry conditions, including fluctuations in commodity prices; governmental regulation of the mining industry, including environmental regulation; geological, technical and drilling problems; unanticipated operating events; competition for and/or inability to retain drilling rigs and other services; the availability of capital on acceptable terms; the need to obtain required approvals from regulatory authorities; stock market volatility; volatility in market prices for commodities; liabilities inherent in mining operations; changes in tax laws and incentive programs relating to the mining industry; as well as the other risks and uncertainties applicable to the Company as set forth in the Company's continuous disclosure filings filed under the Company's profile at www.sedar.com. The Company undertakes no obligation to update these forward-looking statements, other than as required by applicable law.

Fabled Reports on Aster Alteration Survey on the Bronson Property

Fabled Reports on Geological / Structural Survey on the Bronson Copper...

Underground Inspection of Eagle Vein Does Not Disappoint