VANCOUVER, BC / ACCESSWIRE / June 16, 2022 / Sassy Resources Corporation ("Sassy" or the "Company") (CSE:SASY)(FSE:4E7)(OTCQB:SSYRF) is pleased to provide the following corporate update:

Mr. Mark Scott, Sassy President and CEO, commented: "Sassy has made great strides since early last year at creating a foundation for long-term financial success with strategic ownership positions in three exciting entities, each with a bright future in our view. We're now laser focused on our #1 priority of building out the high-grade gold discovery that successfully launched Sassy as a public company nearly two years ago. We've been diligent at protecting our share structure to give us maximum flexibility to build shareholder value in multiple ways."

Mark Scott continued, "We will soon be unveiling a new web site for Sassy as we rebrand around the Eskay Camp and a value proposition that's more compelling than ever for this young Company. We're looking forward to an exciting summer at the Foremore Project where the last five drill holes at Westmore each intersected shallow, high-grade mineralization (refer to March 3, 2022 news release).

In purchasing Rocky Island Gold, Galloper Gold acquired 100% ownership of 5,273 mining claims including the Glover Island claims and the Triple Point Project in southwest Newfoundland, and Mint Pond (previously known as Gander East) on the eastern flank of the Gander Gold Belt.

This acquisition by Galloper Gold, combined with its claims including Wolf Mountain acquired from prospector Shawn Ryan late last year, makes Galloper one of the largest landowners in the Central Newfoundland Gold Belt (see attached map) with over 2,000 sq. km. All properties are prospective for gold and have undergone only limited historic exploration. Galloper will make public additional details on the properties as it progresses its intent to list on a Canadian exchange this year. 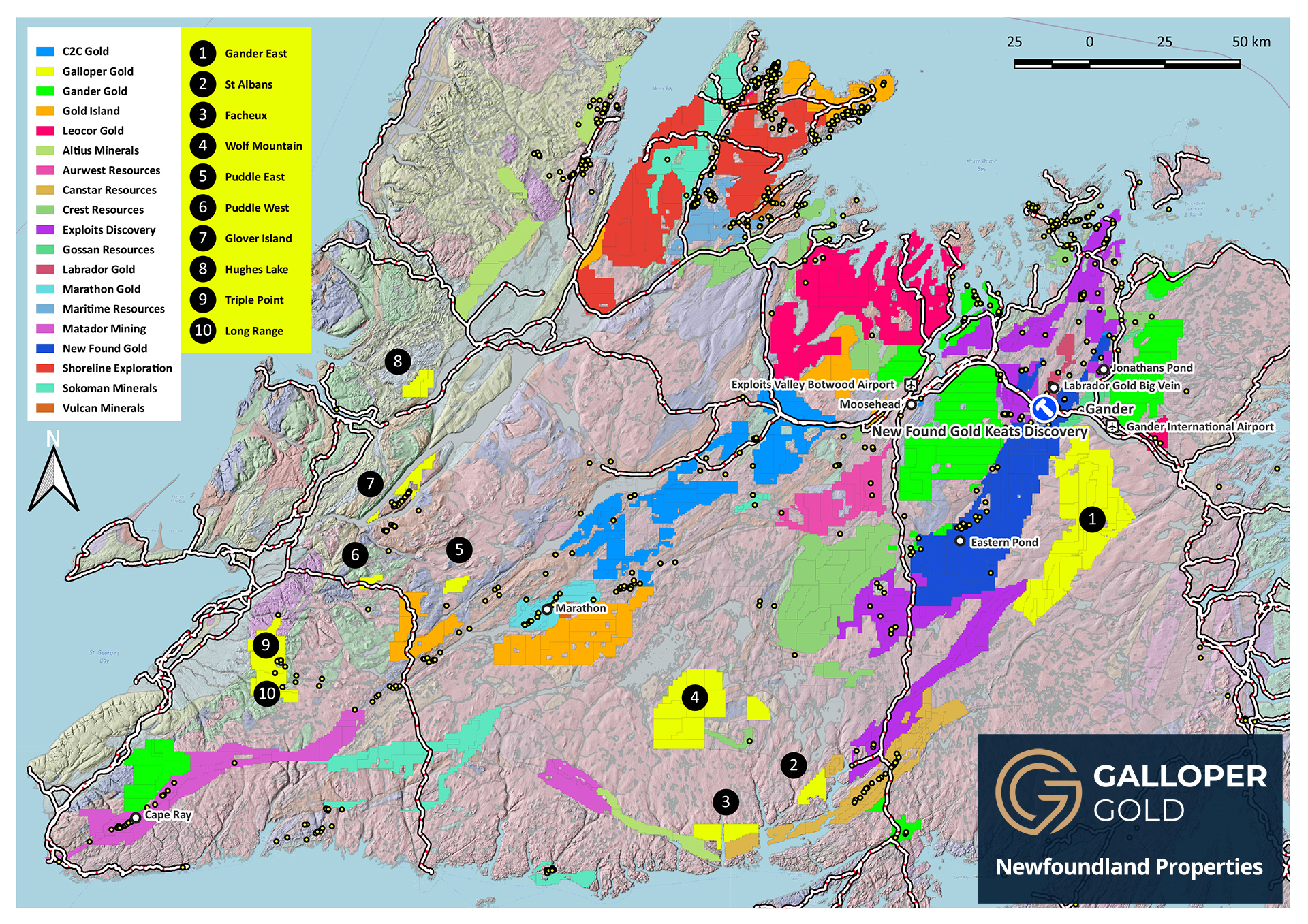 The deal for 8 million shares of Galloper Gold and $700,000 for 5,273 mining claims involved a series of transactions in which Sassy first acquired private company Rocky Island Gold Corp. ("Rocky Island Gold") and its Golden Lynx Project in Newfoundland for the sum of $250,000 cash and 1,260,000 Sassy shares. Rocky Island Gold, as a subsidiary of Sassy, then acquired three properties from Vulcan Minerals ("Vulcan"), one of which was contiguous to the Golden Lynx Property. Sassy paid Vulcan $250,000 cash and 3 million Sassy shares to acquire 100% ownership of these three properties. In total, the combined Rocky Island and Vulcan properties acquired by Sassy comprise 5,273 mining claims along very favorable structure in Newfoundland.

Sassy subsequently entered into a share purchase agreement with Galloper Gold dated May 23, 2022 (the "Agreement"), whereby Galloper Gold agreed to acquire all of the issued and outstanding shares in the capital of Rocky Island Gold. As consideration for the transaction, Sassy has received 8,000,000 common shares in the capital of Galloper Gold, in addition to a cash payment of $700,000. The 5,273 claims include a large land package on Glover Island in southwest Newfoundland contiguous to an historic gold resource.

Galloper Gold is well-financed and has been carrying out exploration across its portfolio of properties since late last year and has plans to apply for public listing on a Canadian Exchange this year.

As Galloper is a non-arm's length party to the Company due to an overlapping executive, the Transaction is considered a "related party transaction" under MI 61-101 - "Protection of Minority Security Holders in Special Transactions" ("MI 61-101"). The Company will rely on exemptions from the formal valuation and minority approval requirements of MI 61-101, in respect of the Transaction, pursuant to Section 5.5(a) and Section 5.7(a) (Fair Market Value Not More Than 25% of Market Capitalization) of MI 61-101. The Transaction was agreed with reasonable commercial terms between the Company and Galloper as if it were on an arm's length basis.

The technical information in this news release has been reviewed and approved by Mr. Ian Fraser, P.Geo., Vice President of Exploration for Sassy. Mr. Fraser is the Qualified Person responsible for the scientific and technical information contained herein under National Instrument 43-101 standards.

Sassy is an exploration stage resource company currently engaged in the identification, acquisition and exploration of high-grade precious metal and base metal projects in North America. Its focus is the Foremore Project located in the Eskay Camp, Liard Mining Division, in the heart of Northwest B.C.'s prolific Golden Triangle, and its newly acquired Highrock uranium project in the Key Lake region of Saskatchewan.

Actual performance and results could differ materially from those currently anticipated due to a number of factors and risks. These include, but are not limited to known and unknown risks, including those set forth in the Company's Management Discussion and Analysis (a copy of which can be found under Sassy's profile on SEDAR at www.sedar.com). Accordingly, readers should not place undue importance or reliance on the forward-looking statements. Readers are cautioned that the list of factors is not exhaustive. Statements, including forward-looking statements, contained in this news release are made as of the date they are given and the Company disclaims any intention or obligation to publicly update or revise any forward-looking statements, whether as a result of new information, future events or otherwise, unless so required by applicable securities laws. The forward-looking statements contained in this news release are expressly qualified by this cautionary statement. Additional information on these and other factors that could affect the Company's operations and financial results are included in reports on file with applicable securities regulatory authorities and may be accessed under the Company's profile on SEDAR at www.sedar.com.

The CSE has neither approved nor disapproved the contents of this news release. Neither the CSE nor its Regulation Services Provider (as that term is defined in the policies of the CSE) accepts responsibility for the adequacy or accuracy of this release.